Hola! Some animals in Mexico have it made, others must work for a living, and others lead short and violent lives. No violence will be depicted in this blog post, but I may allude to same.

In Esqueda, a statue of  Señor Esqueda  stands before a mural depicting a Yaqui deer dancer  and dinosaur footprints that can be seen in the nearby mountains. We saw neither deer nor dinosaurs,  but they are or were here: 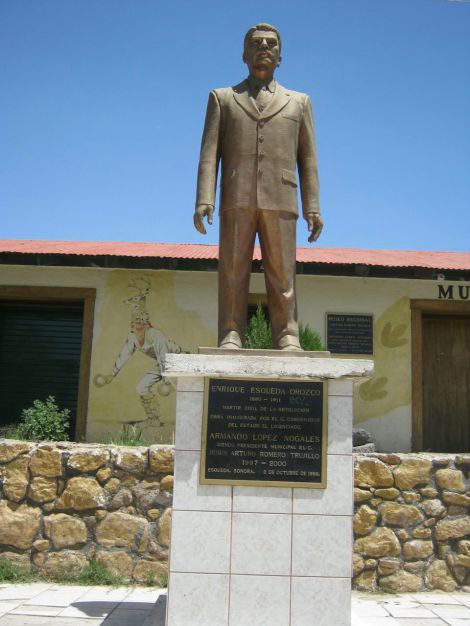 Across the street from the Hotel Granados, a mother and her baby burro munched breakfast in the shade: 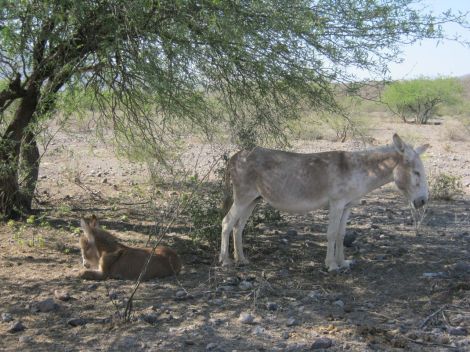 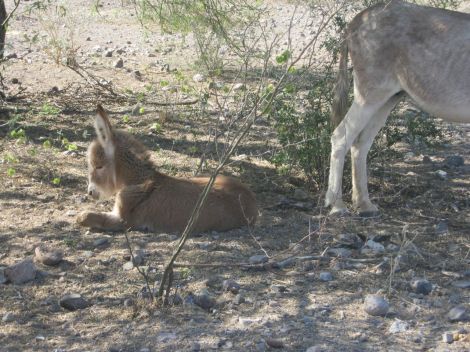 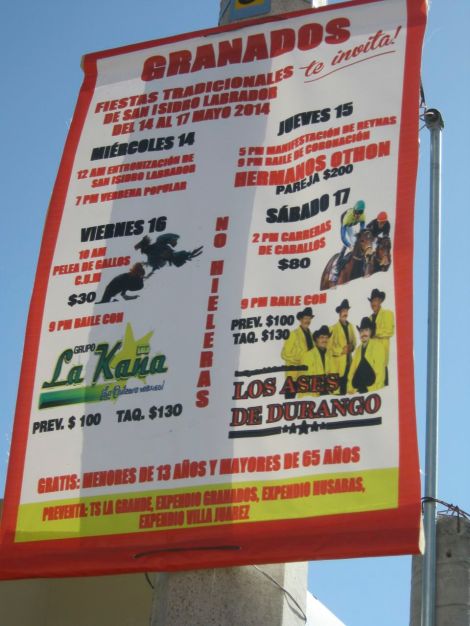 The baby burro told me that he was too sleepy to celebrate San Isidro Labrador.

Onto Hauchinera, and a cool bull sculpture by Jess Davila: 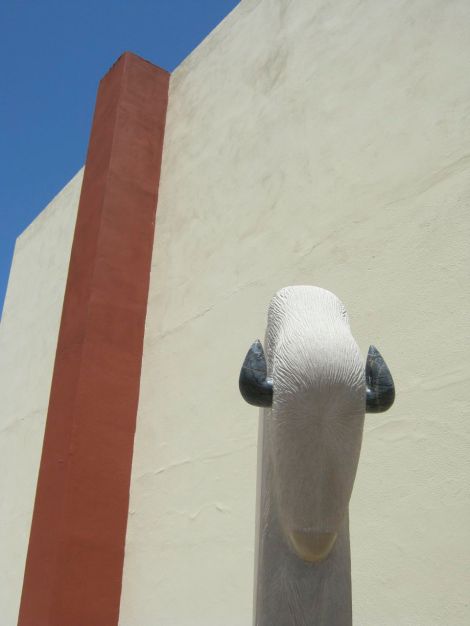 The first evening in Huachinera, I went for a walk and saw some cute chihuahuas: 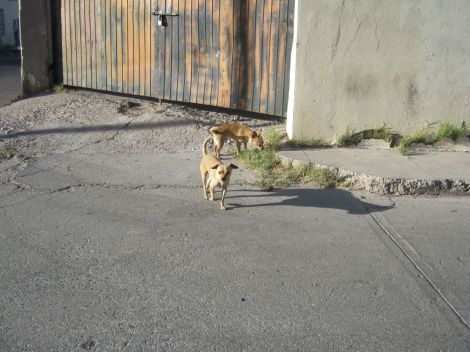 Who seemed fairly uninterested in me: 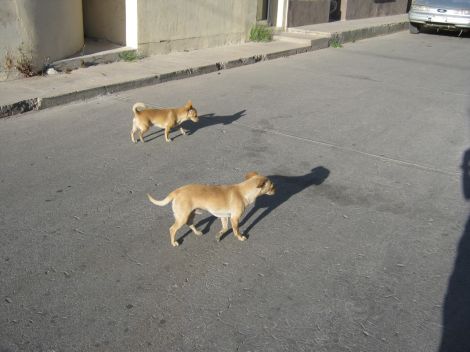 Until, immediately after I snapped the above photo, they started barking in a big way at me and a man had to come out of his house to tell them to back off.

The Rio Bavispe’s name means “the place where the river turns” because it heads north then makes a U-turn and heads south on the other side of the mountains. The Town of Bavispe’s seal depicts wild and tame animals of the Rio Bavispe valley: 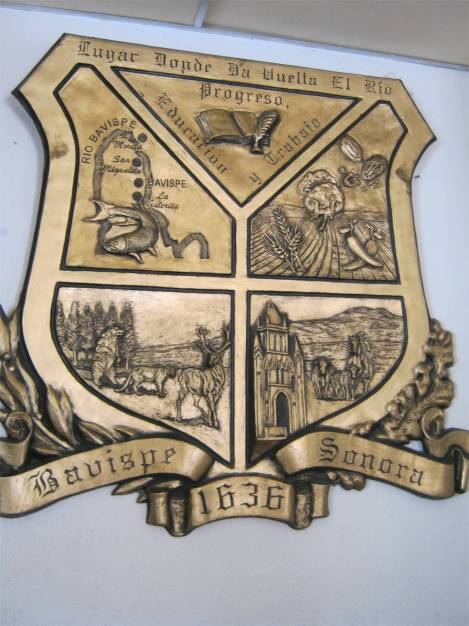 In Bacerac, the plaza entrances have turnstiles to prevent horses and cattle from getting in: 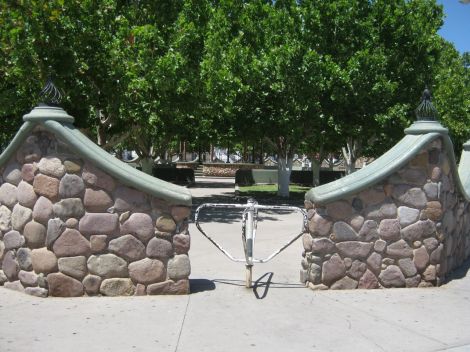 Ganados (cattle, stock animals) provide the main source of income in this region and it’s not uncommon to see a couple cowboys working along the roads: 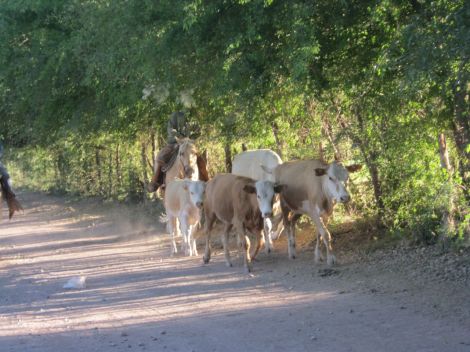 There is a cowboy on top of that horse, he’s hidden in the leaves.

In the town of Huachinera, cowboys commute to work by horse, of course: 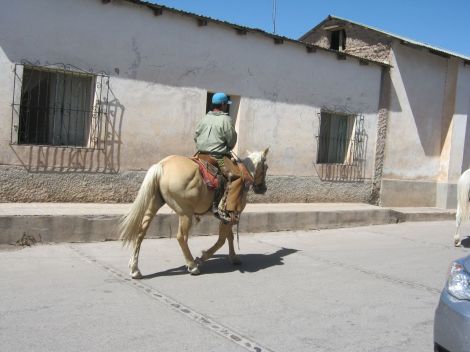 But not everyone rides horses for work, some simply enjoy riding them around town. Lee and I went for a walk one evening to the plaza, and there were 9 horses coming at us from the right, 3 from the left, and 4 coming straight for us. We dashed to the plaza seeking protection behind its low wall, much like one might dodge oncoming car traffic.

Lee commented that it might be like the “paseo” in Mexican towns and cities where people stroll around the plaza every evening. Except on horseback.

We asked a group of teenagers what was going on and they said “It’s San Isidro Labrador Day!” And they were probably thinking: So of course, everyone rides around on horse, duh, you silly tourists.

Earlier that evening, the younger kids rode their horses around town, like these three guapos (handsome young men): 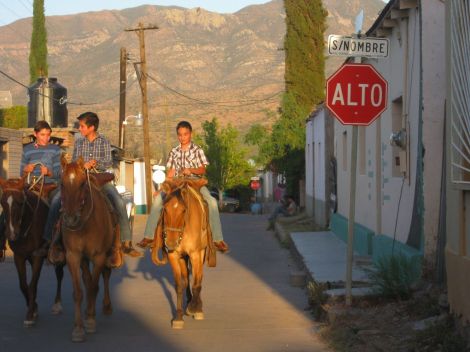 The following day, we learned from our host Jess that there was a lot of town coordination to make sure everyone had a horse to ride that evening, and all the kids and teenagers took turns on horses.

The church was raising money for a new floor by selling raffle tickets, so I bought a couple although Frida Kahlo might disapprove: 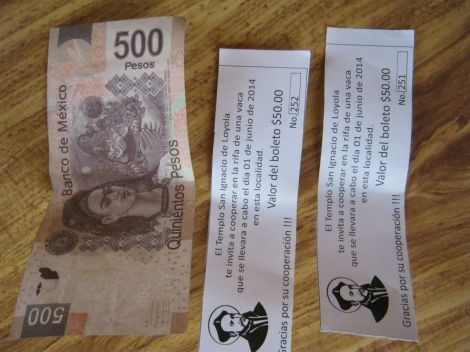 The raffle tickets were for a cow. The day of the drawing has now passed, and I didn’t get my winning phone call.

In Lolita’s kitchen, her dog had a special place beneath the cattle calendar: 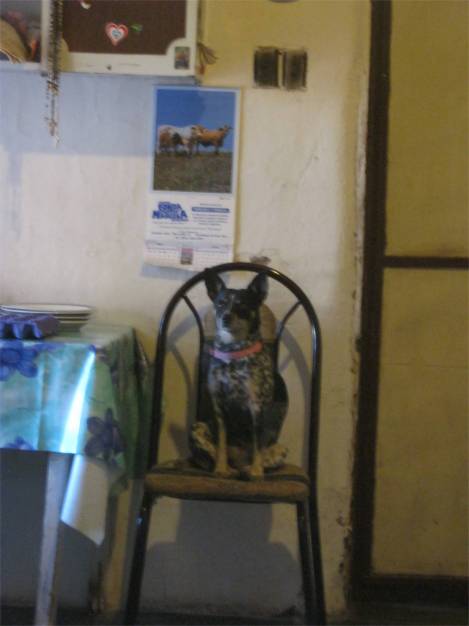 The garden cats dozed outside the screen door, waiting patiently for some food: 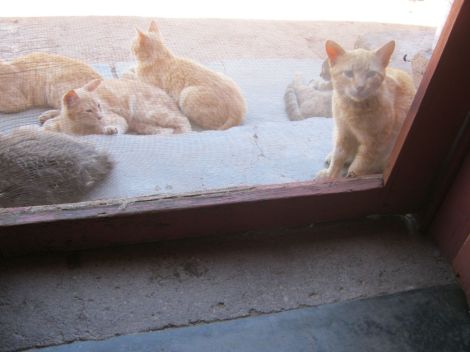 Because what would the internet be without cute pictures of cats?

© 2014 by Lisa Howells and Mary Reynolds. All rights reserved.

One response to “Animales de Mexico”