On farm road to Bad Sackingen . . . can you find the Kater in the photo below? 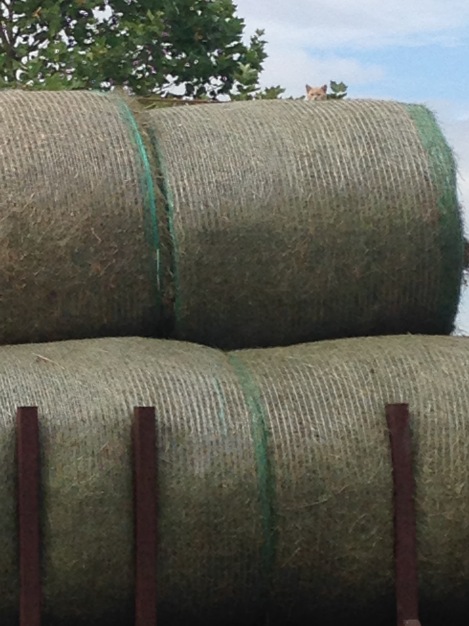 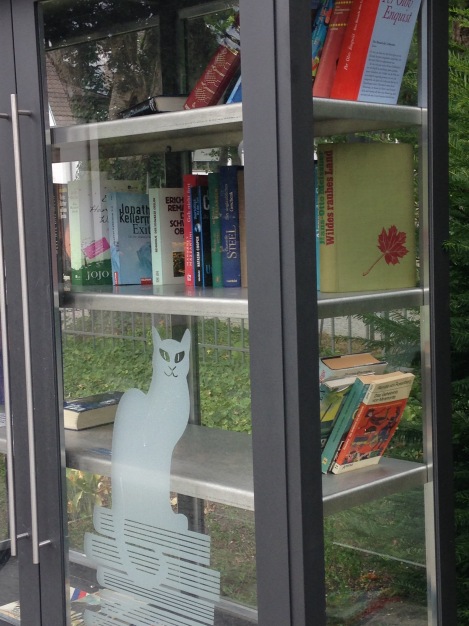 The lowly trumpeteer falls in love with a noblewoman and cannot marry her because of his low social status. The pope intervenes, makes him a nobleman, they marry, and live happily ever after. Now there is a big park in honor of the Trumpeteer, and many Trumpeteer and cat images throughout the town. 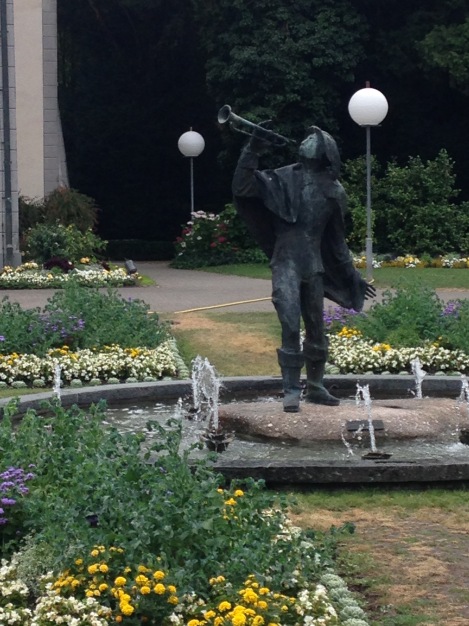 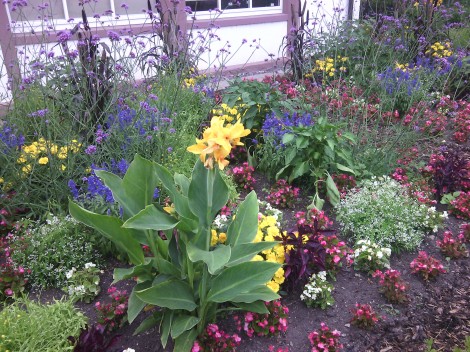 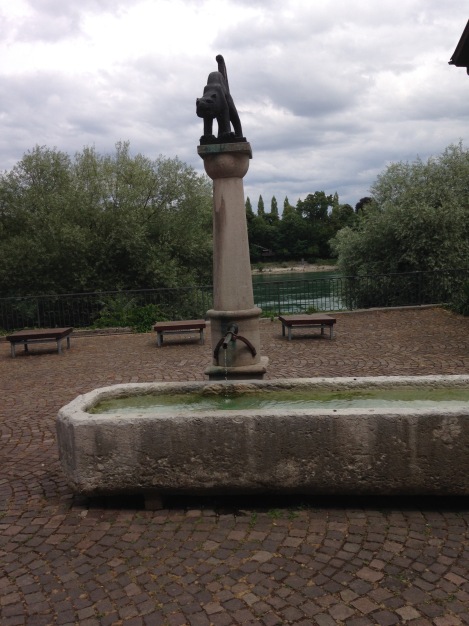 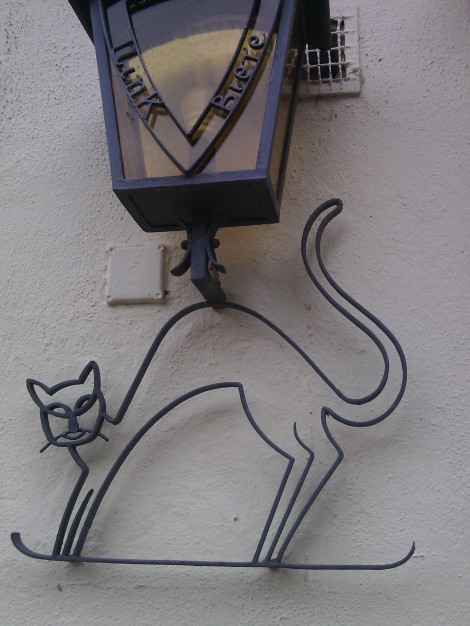 Lamp at the Hotel Kater Hiddigeigei. 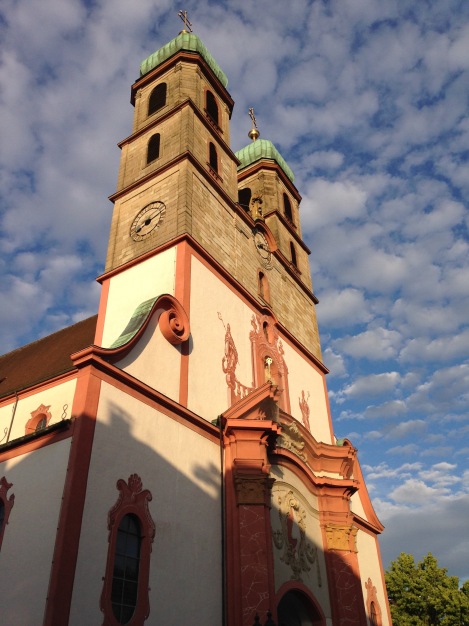 A more typical Rhine photo: Fridolinsmunster, Church of St. Fridolin. Because he founded an abbey in Bad Sackingen in the 6th century. 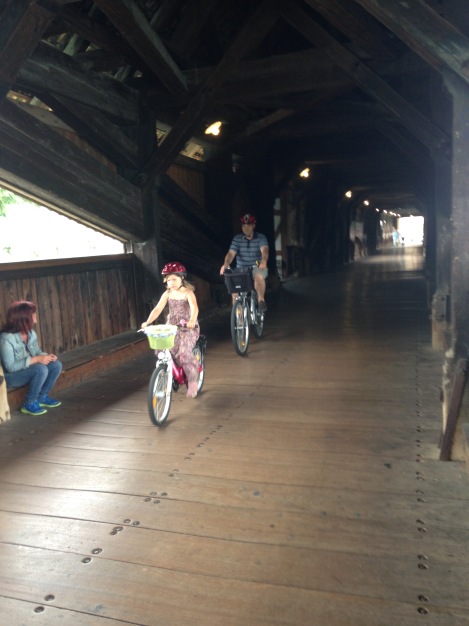 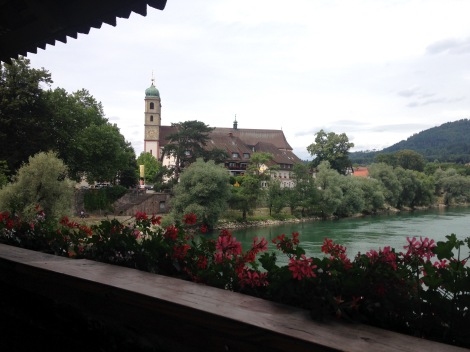 View of Germany from inside the bridge.

For mountain bike fans, Bad Sackingen is also home to the Sabine Spitz Mountain Bike Arena. World champion mountain biker Sabine Spitz is from this town; the Arena features a pump track and other trails for riding and competition. Because its in the suburbs, Las Chicas do not partake.

In another town, the yarn bombers decorate medieval walls: 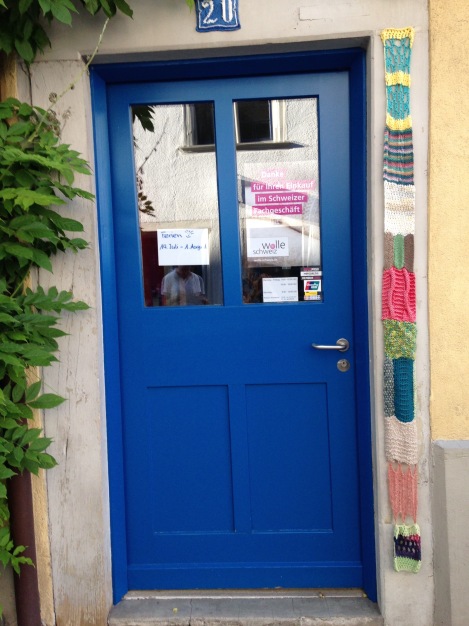 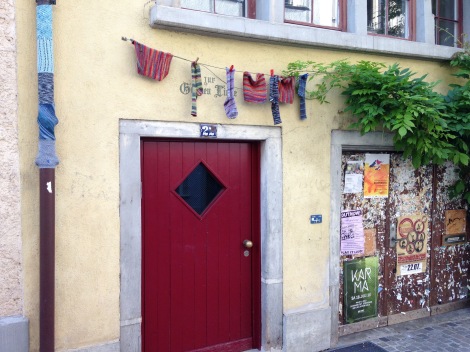 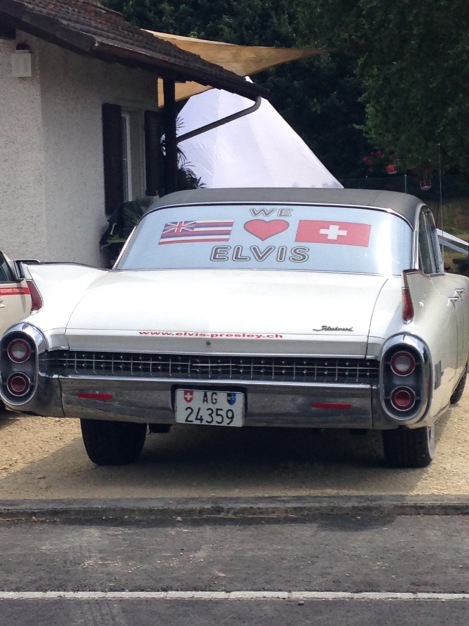 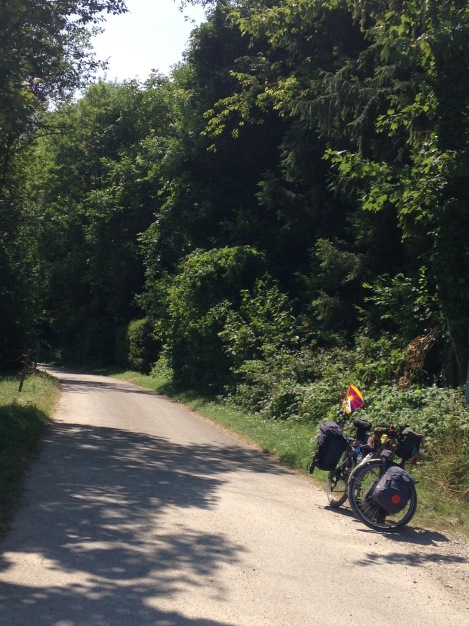 Extremely well-provisioned bicycle ridden by a Swiss woman who had toured all over the world.

Basel bills itself as an art center and we enjoyed the crazy kinetic fountains: 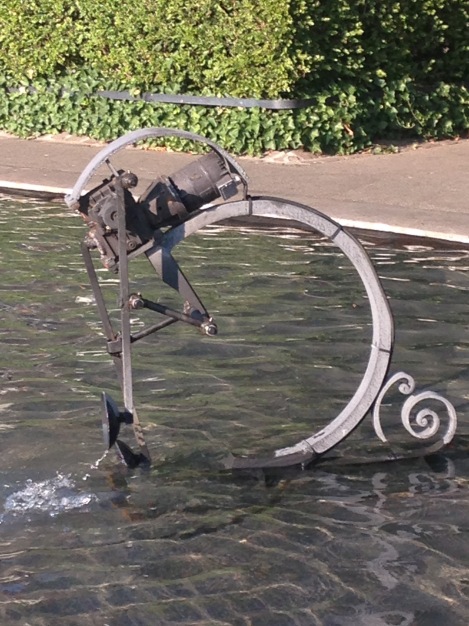 Basel swimmers float down the Rhine with friends and barges: 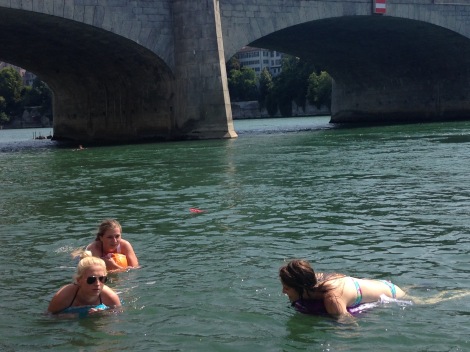 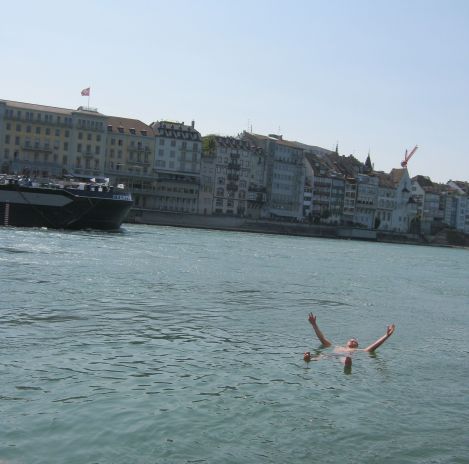 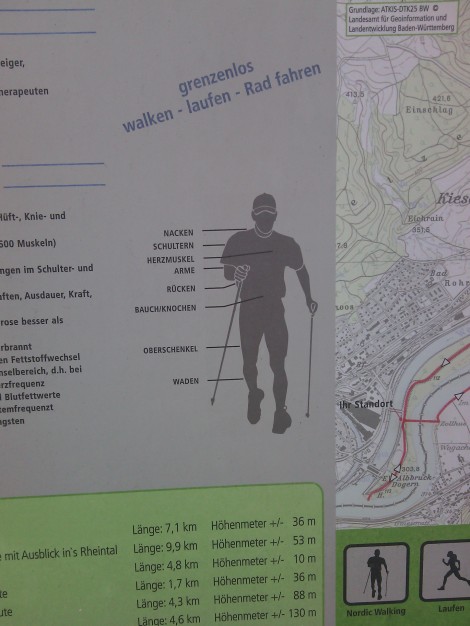 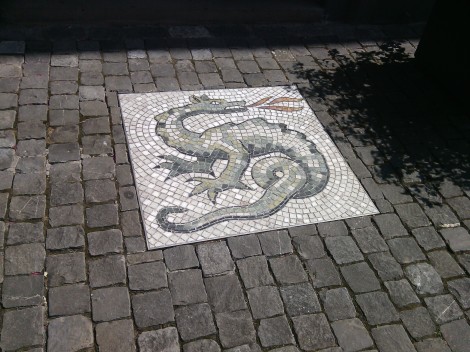 Dragon Museum sidewalk tiles in the village of Stein am Rhein. 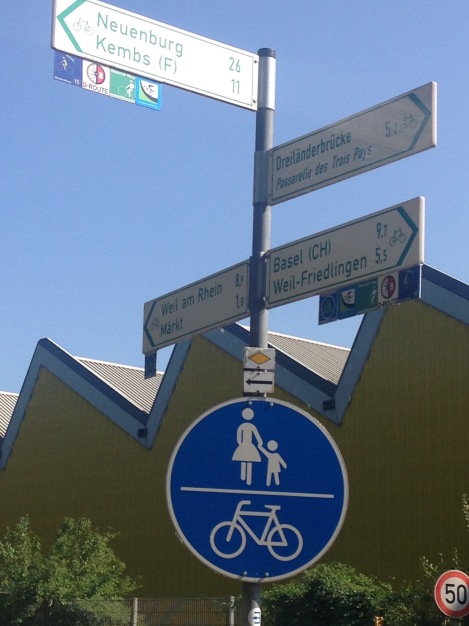 Many routes, which is the right one? 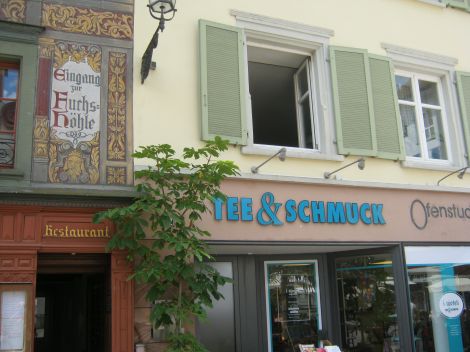 Modern commerce in Freiburg, next to 500-year-old commerce building. 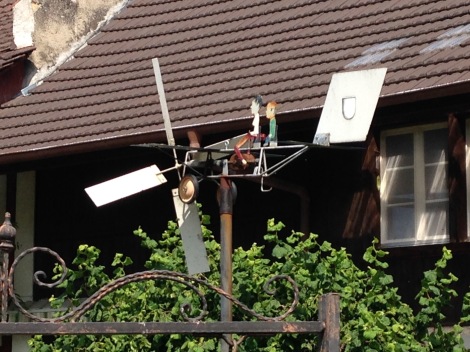 In Basel, we also visit the 500-year-old Rathaus, or City Hall, at sunset. Its golden tower pokes above the painted brick facade. And because we begin this post with the story of a cat, we  end with a view from the courtyard of this building: a mural featuring a Basel nobleman and his two dogs. 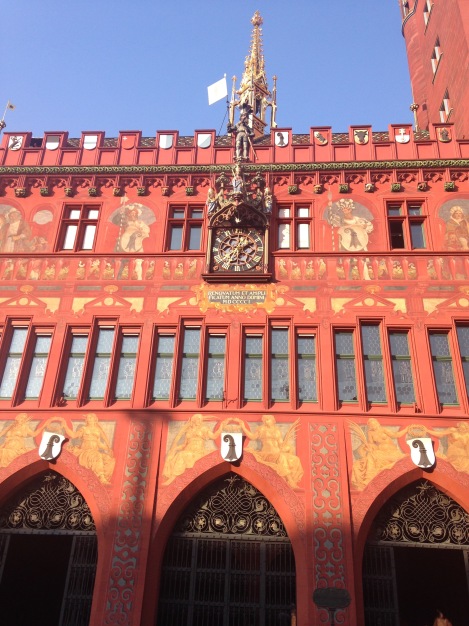 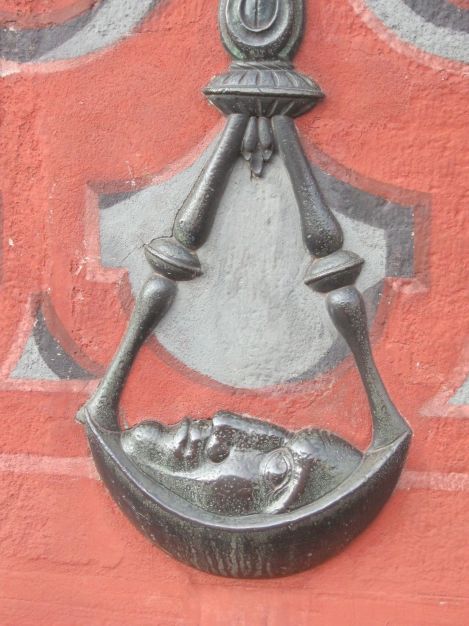 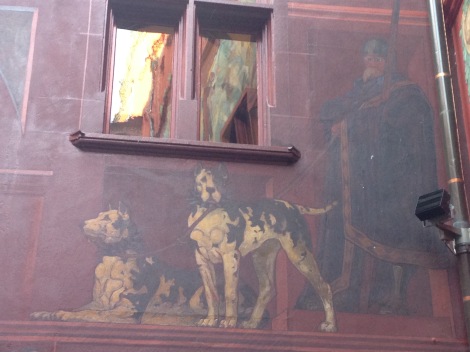