Las Chicas visit Oxford, England, in August. Lisa attends a workshop at Exeter College and Mary studies the city’s cobbled streets and paths along the Thames. Oxford celebrates new classics like the Harry Potter tales, and it also remembers famous authors who once taught here like C.S. Lewis, J.R.R. Tolkien, and Lewis Carrol.

The first day in Oxford, Las Chicas amble along the Thames River path and see narrow canal boats for touring and living.

Port Meadow: a meadow with boats! 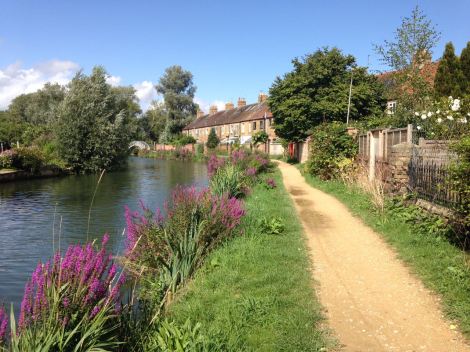 A sunny day along the Thames.

Canal boat with old factories in the background.

Mother swan and her cygnets.

Between her classes at Exeter, Lisa eats at a Potter-style dining hall. The dining hall used in the movies is located at Christ Church College in Oxford, but is not open to the public. 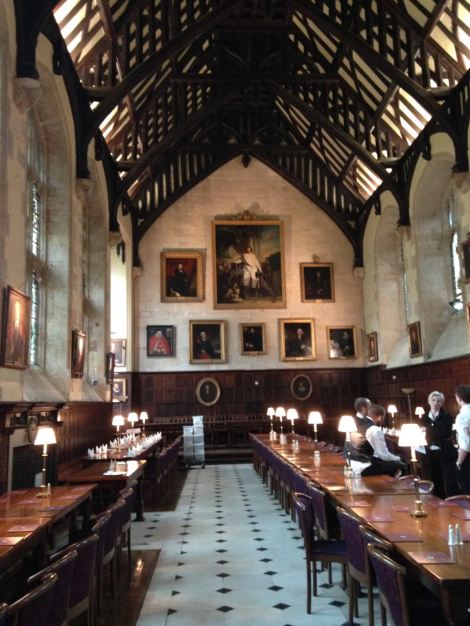 At the Exeter College Gothic chapel, the sun filters through  stain-glassed windows to light up intricate tiles on the floor: 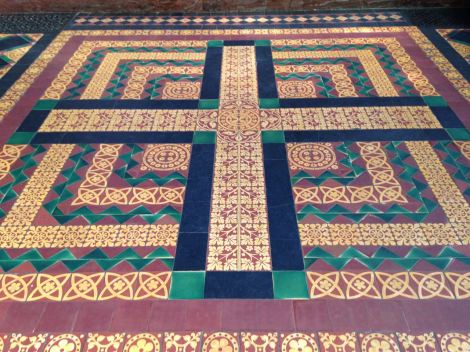 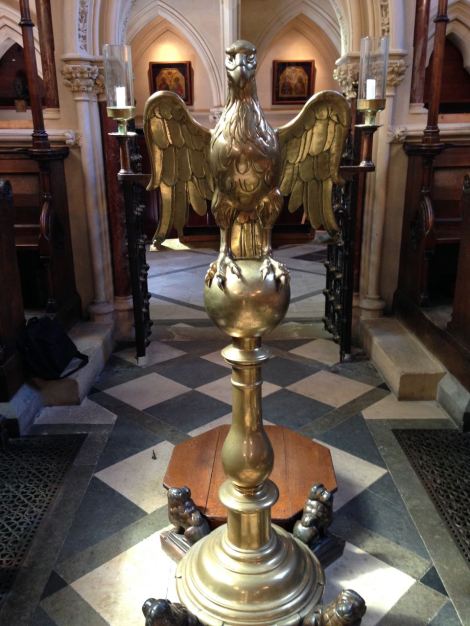 In 1623, Exeter College built its chapel at the intersection of ten ley-lines: lines around the world that connect ancient/neolithic sites likes stone circles and Christian chapels. Some ancient paths and tracks followed ley-lines.  Today’s chapel is “new,” built in the 1850s to replace the old one which required expensive renovations.

Two towers dominate the Oxford skyline. The Carfax tower is all that remains of  the 12th century St. Martin’s Church. It’s at a busy corner near the bus station and shops on the High Street and St. Aladate’s Street. 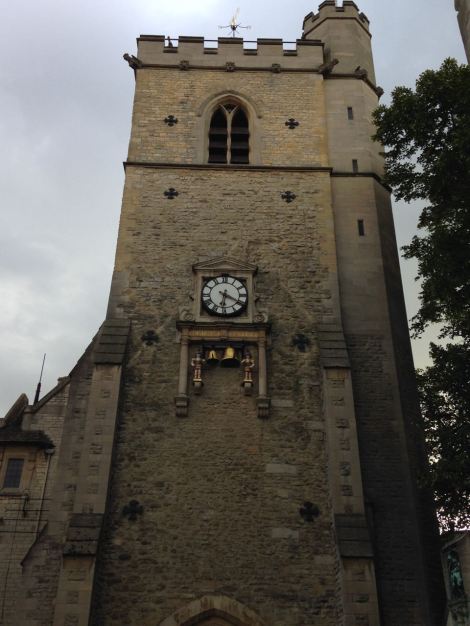 It’s the law: no building in central Oxford may be taller than the Carfax Tower.

Christopher Wren designed the Tom Tower connected to Christ Church College. Las Chicas walk by it every day. At 9:05 pm, the “Great Tom” bell rings 101 times to mark  curfew for the original 101 scholars. The timing is the old “Oxford Time” 9:00 pm, 5 minutes later than Greenwich time. Two views of the tower:

Gothic architecture abounds, with buildings made of golden ochre stone from the nearby Cotswolds. 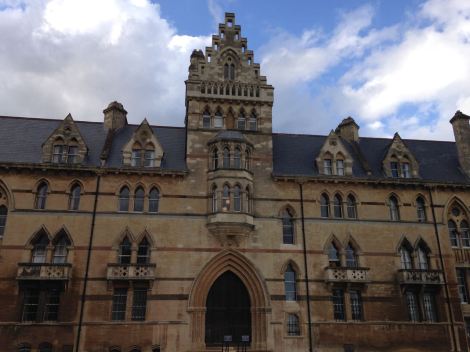 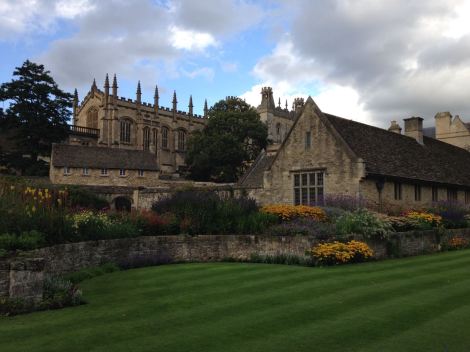 On a rainy day in Oxford, Mary takes a tour of the Bodleian Library and learns that Oxford became a center of learning with students who studied inside Catholic churches. Later the protestant Church of England took over the churches and colleges.  Oxford University today is a consortium of 33 colleges. Libraries like the Bodleian had high ceilings and tall windows to maximize light inside for reading.  The tour includes a rare look inside the round Radcliffe Camera, home to history and other humanities books. 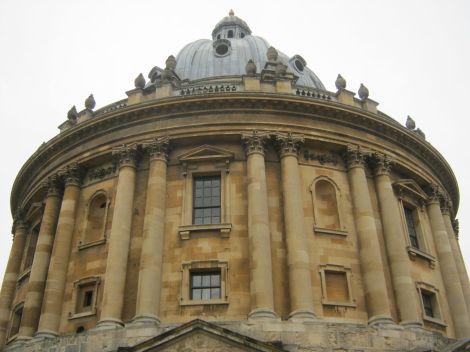 After the tour, Mary crosses the street to the newer Bodliean’s Weston Libary to visit the Marks of Genius exhibit. Here she sees amazing original documents ranging from ancient papyrus texts and maps to famous works like a Gutenberg Bible and the original score Handel’s Messiah. Also included: original cover art for The Hobbit and the Magna Carta. Lisa visits the exhibit during her lunch hour on another day and takes these photos:

18th century Bhagavadgita, to be carried as an amulet around one’s neck, not to be read.

Astronomicum Caesareum from 1540: rotating layers of paper show positions of stars throughout the year. 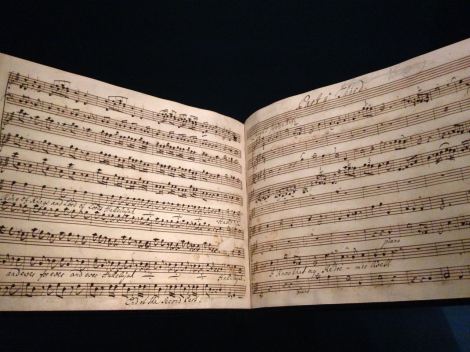 Oxford pubs were also centers of learning and discussion and Las Chicas enjoy a pint at The Eagle and Child where British ales fueled the writings of C.S. Lewis, J.R.R. Tolkien, and Lewis Carrol. 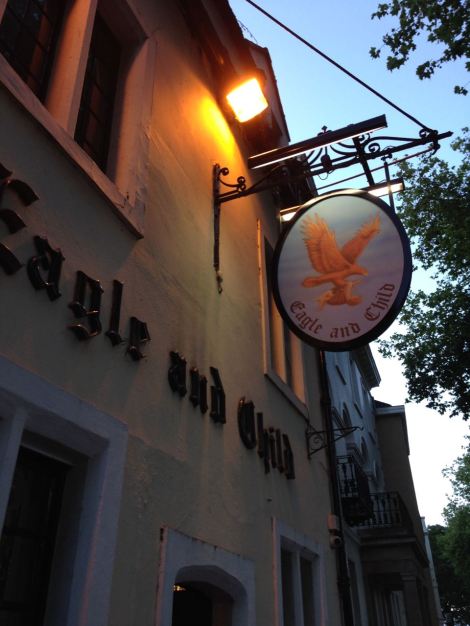 Literary photos inside the pub.

Today, J.K. Rowling is a favorite among souvenir shops: 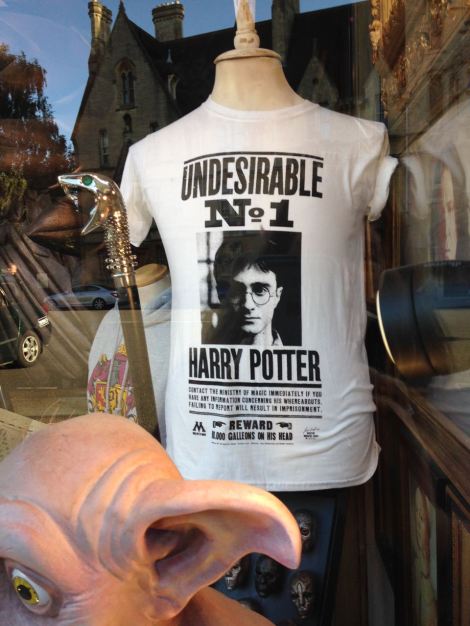 Oxonians use bikes for transport and recreation:

Mary walks along the Thames and continues upstream from Port Meadow to discover more meadows and bucolic scenes featuring canal boats, horses, cows, and a kayaker: 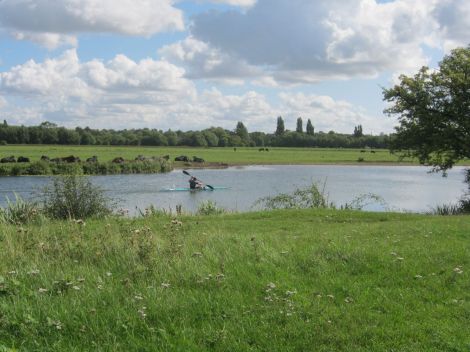 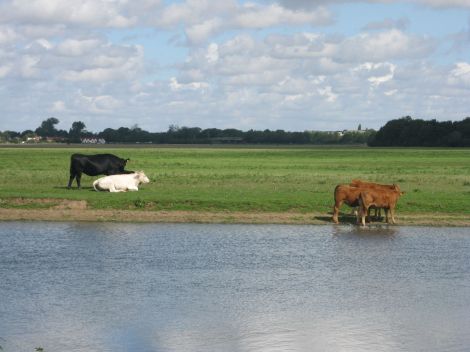 As she returns to Oxford, she envies a riverside garden, complete with apple tree:

Closer to the guest house, she sees more recreational boaters by the Folly Bridge:

On another walk, Mary heads downstream toward Iffley Lock for more riparian entertainments.

Canal boat tying up in the lock.

Geese prefer the path to swimming complications of the lock. 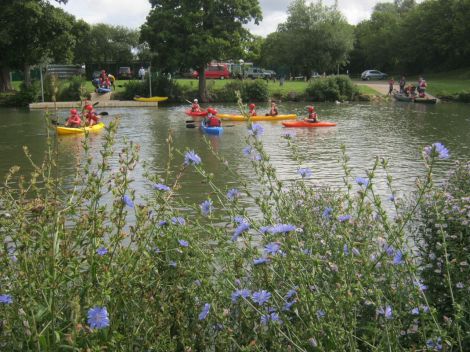 A British classic: rowing on the Thames.

One response to “Travel to Oxford: Walks and Books”