On our way to our bike tour of Berlin, we walk past the Berlin wall. Of course, “the wall” came down in 1989, but the city offers various interpretative symbols of it today. 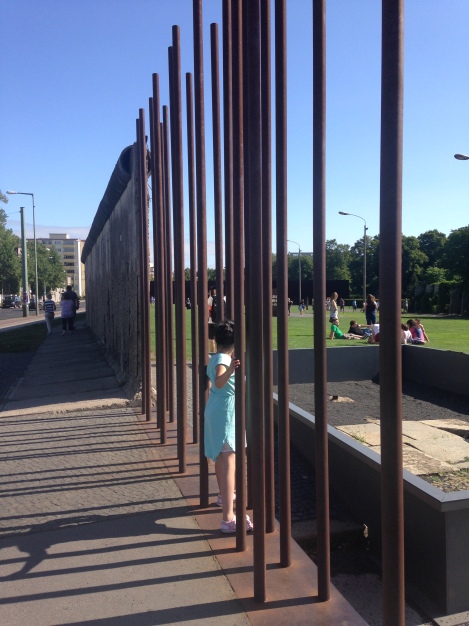 We begin our tour at an old brewery, the first to bottle beer. Now it’s home to arts and culture businesses and non-profits. The bike tour covers much of Berlin’s grim history.

View of “death zone” from a tourist overlook modeled after a wall guard tower. 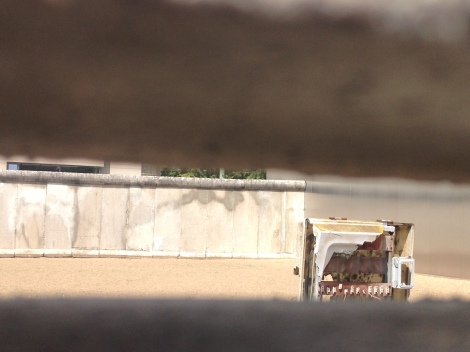 We peer through the original preserved wall to the “death zone.”

Born close to the wall in West Berlin, our bike tour guide shares childhood memories of what it was like when the wall fell. “The stores and streets were crowded, so many people from the east coming into the west,” she says. She remembers asking her mother why someone was buying a whole carton of yogurt containers, and her mother replied that they had never had such quantities of food in East Berlin.

We see the Stumble Stones: names of Holocaust victims embedded in the street where their homes used to be. 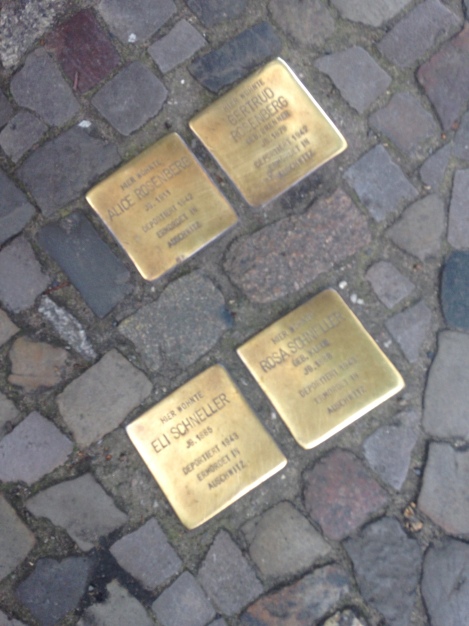 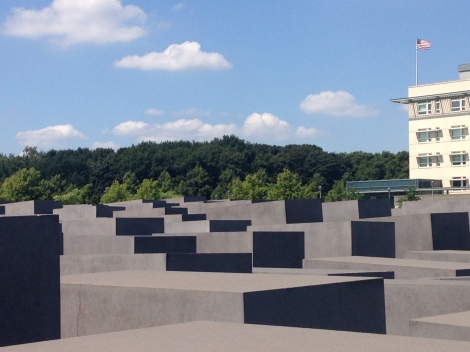 There are also happy places in Berlin. 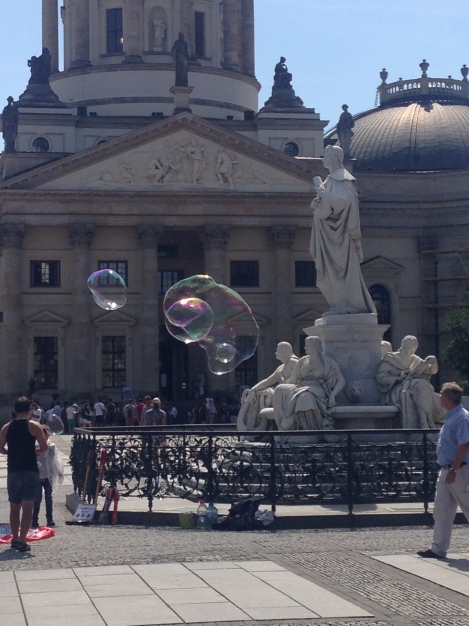 Gendarmenmarkt (plaza) between the Neue Kirche and the French Church of Friedrichstadt.

Berlin Cathedral, with telecommunications tower behind it.

Quadriga atop the Brandenberg Gate

We explore the city on our own the next day. We see cool modern buildings:

Office building in a curvy skin of metal sheeting.

The telecommunications tower at Alexanderplatz, the tallest structure in Europe.

We also discover the Memorial to the Genocide of the Sintithe and Roma, (gypsies) killed by Nazis during the Holocaust:

German government headquarters before WWII, the Reichstag fell into ruins during the time of communism in East Berlin. After re-unification, the government completely gutted and renovated it; the Reichstag now serves as the meeting place for German legistlature, the Bundestag. A new glass dome atop the building (replacing the destroyed original cupola) allows citizens and tourists to literally gaze down from above as the German Parliament carries out its legislative activities. 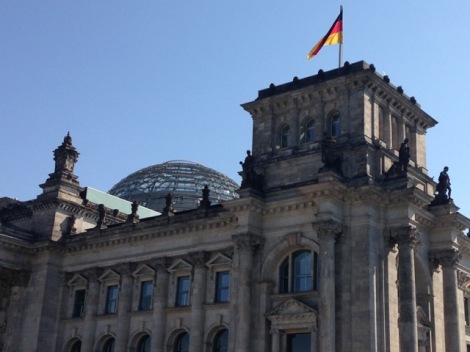 We return to the government area one night to see a light show called “For the People of Germany: Reichstag to Bundestag.” It’s an educational journey through a couple hundred years of German history, WWI, WWII, communism, then the joyous moment of the wall coming down, then German propaganda of we are the “volk” the people, and Germany is great. Except even in the present-day pictures and videos, there isn’t a single brown-skinned person. And there are plenty of people, like the Turks, who have lived in Germany for generations and are German citizens. Curious.

Here’s the Bundestag office building, on the canal as the sun sets and the light show begins: 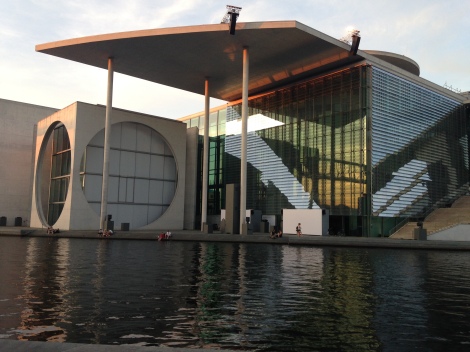 On the same canal, there’s a reminder of a less celebrated time:

Crosses on the canal mark places where people were shot and killed trying to swim from East Berlin (on the far side) to West Berlin.

We visit Museum Island and ponder the Egyptian artifacts in the Neues Museum and the Impressionist/Expressionist exhibition at the Old National Gallery. But first, we must wait in line with other tourists who take our picture. It’s a remarkable 100 degrees this day in Berlin, but we can take it!

Egyptian-style ceiling in a gallery room.

Hieroglyphics from an Egyptian tomb.

Entrance to the Old National Gallery.

But all is not bike tours and museums, it’s time to drink beer and coffee! Las Chicas meet up with  Berlin friends. We have dinner at a biergarten with Lisa’s former University of Arizona colleague who now works for a tech start-up in Berlin, and we have coffee with Mary’s former cycling teammate and freelance journalist who has lived in Berlin for the past decade or so.

On our final day, we walk through the Mitte one more time to see an exhibition of female artists and an eclectic and global collection of 19th century curiosities at the “me Gallery.”

Pocket sundial from the cabinet of curiosities exhibit.

Berlin is also known for its street art, including these taken on walks in the Mitte. 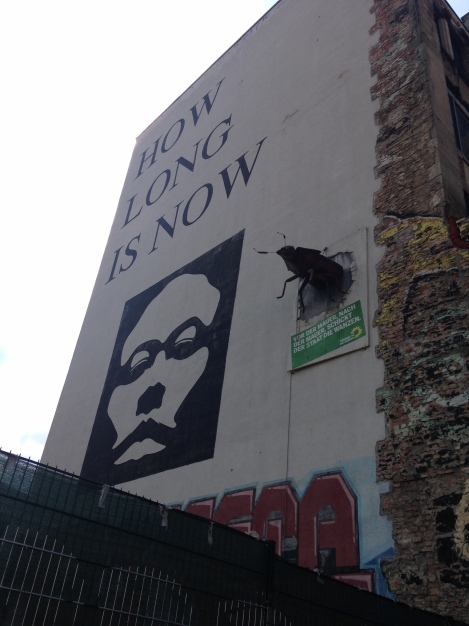 One response to “Berlin : Beyond the 20th Century”